History of the Bork

History of the FIT BORK

THE BORK IS BORN

The idea of a BORK came from a book of Droodles, owned by FIT freshman Bob Brucker. This book contained a droodle of the footprint of a wounded BORK. This gave Delta Delta Tau Brother Bill Duffield the idea to create the BORK.

Some background on Bill Duffield...

He was the original BORK and was a Computer Science major. For his senior project, he broke into the IBM 1130 compiler and inserted the command "Gobble", short for "Gobble, Gobble, Ralph Snort." The 1130 had a combined card reader/punch.  In those days, students had to keypunch their own programs on the keypunch machine. You could sit down in the computer center in the basement of Grissom Hall in the quad while they were running student card decks. A rhythm would set in and, as the card reader would read a job stack, the computer would compute, and the printer would print. Because all the student jobs for a single class were comparable, they all had similar rhythms - kind of hypnotic, actually.

Well, if you called "Gobble" in your program deck, your program would execute normally, but when it was completed, the card reader/punch would do a core dump on all the cards in the hopper - which would be other student's jobs. The easy rhythm would be punctuated with the staccato of the punch and the profanities of the student operators. 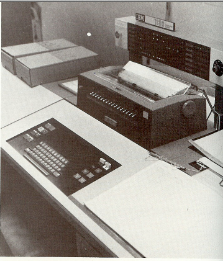 Bob Brucker bought his book of droodles at the gift shop of a restaurant in Savannah, GA when driving back to FIT for the second term in his freshman year.

Droodles are pictures that you look at and try to determine what they are.  The book would then provide a humorous definition for the picture.  Below are a set of 4 droodles, courtesy of Bob, that he remembers: including the one that inspired the BORK.

Here are the definitions for the droodles below. 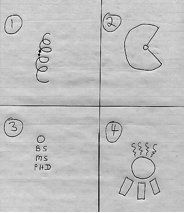 4.  This one had two definitions:

a. "A rolling stone that gathered moss and also three tickets

This was the original footprint and did not resemble the one we know today.

Bob found the concept of a wounded BORK to be very funny so for the next month He went around campus saying in a high squeaky voice "It’s a wounded BORK".

Bill Duffield and Bob Brucker were rather close friends at the time, and Bill heard him say this on many occasions.  Bill did all the rest on his own, without Bob’s knowledge, and Bill became the Professor of BORKology.  He designed the BORK Footprint and all the miscellaneous facts described later in this history.  Bill also started the Sly Fox vs. The BORK fights.

DDT Brother Bill Duffield was the only living brother to have ever actually seen the BORK. He saw him in the jungle one evening in 1967. It is believed to have been after the Apollo One disaster which was in January of 1967. DDT Brother Duke Carleton was a freshman who lived in South Dorm with Greg Cone, another original DDT Brother. In February of 1967 the university renamed South Dorm to Grissom Hall in honor of Gus Grissom, one of the crew who died in the launch pad fire, who at one time, took classes at Brevard Engineering College.

In those days there was no bridge connecting the dorm complex to the library area. Students would trudge through the swamp on make-shift bridges of 2X10’s and other boards so that they could cross the wetlands with somewhat dry feet.

One evening Bill came running into Duke’s room which was 204 East Grissom Hall soaking wet with a remarkable story about a creature he saw in the jungle who chased him while returning from the library.

They all grabbed flashlights and went hunting for the creature in the jungle. As they entered the swamp they all were overcome by the wild noises of the jungle… and the BORK!

Scared out of their wits they returned to Duke’s room to hear more about what Bill had encountered. As described by Bill the creature was a cross between "Big Foot", "Sasquatch", the "Abominable Snow Man" and the "Yeti". They stayed up all night that evening listening to Bill’s descriptions and his account of the beast chasing him from the swamp.

Shortly after Bill's encounter, footprints of the BORK began to appear in various places around and off campus. Footprints have been seen as far away as on the floors of the Van Croix Movie Theater which was down at the corner of New Haven and US 1.

At one time footprints were seen at Lum's, a hotdog and beer place on Babcock next to where Hooters is today. Footprints have shown up in many more areas around campus. Hundreds in the various areas in the jungle. The High Pagoda, the Low Pagoda, the Swing, the Tree Fort, the Crossing, the FIT Auditorium floors and even in the concrete during construction of the Student Union Building.

One evening in the Fall of 1967, when Duke was a sophomore and was rooming with Vance Chavez they heard loud noises outside their dorm room, 204 East Grissom. They opened the window and could hear the BORK growling outside their room down in the swamp. The next morning they found BORK prints on the walls of Grissom Hall leading half way up to their room window on the second floor.

Since then Duke has assisted and lead many pledge classes on searches for the BORK. The BORK has been very elusive and although Duke has been close enough to hear him breathing and growling several times, He has not actually ever seen him.

Duke’s last encounter was during the Apollo launch of which he believes was Apollo 16. DDT had a giant launch party for that particular launch. The Fraternity set up camp at the space center south gate the day before the launch. Many of the Brothers spent the night there at camp and partied all night before the launch the next day. In the morning when they woke up to get things ready for the rest of the Brothers on launch day, they found BORK prints in the sand in front of their camp site.

For some unknown reason the BORK became an unofficial Brother of DDT and although he scared many a young pledge, he has been a silent guardian over the Brotherhood for many a year.

Other Recollections on the Birth of the BORK

The BORK came to FIT with Delta Delta Tau (DDT) Fraternity Brother Bill Duffield on one Halloween Night in the 60's.

Bill, and other DDT Fraternity Brothers, were roaming through the Jungle in costumes one Halloween Night. Bill began making this "BORK" sound and thus the BORK was born as well as Bill's nickname.

WHAT IS THE BORK?

The BORK was a mysterious creature that no one ever saw - no one knew what it looked like. But it had a knack for leaving foot prints in the swamp, wet cement, and disturbed earth at construction sites. It also took the blame for any mischief that could not be pinned directly on a person.

Miscellaneous facts about the BORK:

The BORK came into being from the spontaneous generation of swamp muck.

Its favorite food is cement trucks.

Many students would say "Don't let the BORK get you" instead of saying goodbye or see you later.

DDT Brother Dave Thomson believes the origins of the BORK are in Scandinavian folklore - Bjork - but that has not been verified.

The first BORK fight was held on "February 30th", 1968.  This was a leap year and was Bill Duffield's way of saying midnight between Feb.29th and March 1.  Bill hung signs all over campus that read "Sly Fox vs. The BORK, February 30th in the FIT Swamp".

The first student to play the part of the BORK in the BORK fights was a member of Chi Phi who's nick name was Eagle (because he had bad vision) and his first name was Steve.

One BORK fight was advertised in the school newspaper, The Crimson” in Feb. 1970 and then an article describing the fight was published in March.  The reporter was not pleased with the escape of the Sly Fox and BORK in a Station Wagon.

It is believed that DDT Brother Dave Thomson was the last living BORK.

DDT did a BORK fest for freshman orientation. The Brothers borrowed a GI generator from the Anchorage courtesy of DDT Brother Kenny Watts and then Student Bob Brucker, who set up a stereo and speakers down in the swamp with jets, machine guns, and swampy sound effects.

The BORK sound was a tape of the word BORK recorded at high speed and then played back slow.

For the amusement of the freshmen, a mock battle was staged between the BORK and Sly Fox. DDT Brother Dave Thomson dressed up in a set of waders stuffed with newspaper, swim fins, and some kind of a rubber Halloween mask.

After the mock battle one of the freshmen tried to tackle Dave and they all jumped into the back of someone's station wagon to make the getaway.

Again, it is believed that was the last time the BORK was seen on campus, although a frequent DDT Fraternity pledge class project was to go out and repaint the footprints.

At one point in time the school bookstore had several BORK related items for sale.  Bob Brucker has a BORK Print ashtray that he bought there. 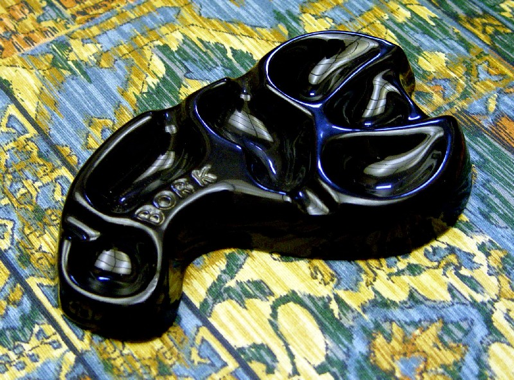 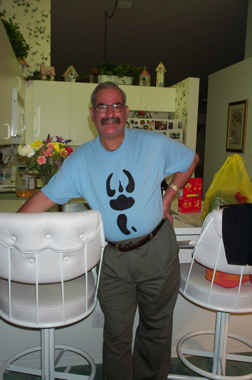 The legend then grew and was incorporated into freshmen orientation. The BORK roamed the Jungle and used to attack freshman while they crossed over from the dorms to the Student Union Building. The freshmen, as part of being a freshman, had to always walk thru the Jungle to get to classes and were not allowed across the bridge between the quad (dorms) and the Student Union Building. Now the freshman retaliated against the BORK with "The Sly Fox".

The above contributed by the following Alumni, with many thanx!

You must be a member to submit this survey. If you are a member please log in first. You can't submit this form until you've logged in.